skip to main | skip to sidebar

Is this where newspapers are headed?

I saw a headline today to the effect that the US and Israel agree that Iran is not developing a nuclear bomb.When I clicked, below is what I found. Well, maybe I know a little more about the headline, but I am far more confused about whether is the way a newspaper page is going to look in the future and horrified over the notion of the increased blending of US and Israeili interests as shown by the wrap-around banner. Israel is just another country and we should value the people there in precisely the same manner we value people in every other country. I'd much prefer to see our flag morphed into a composite of all of the flags in the region of which Israel is a part. 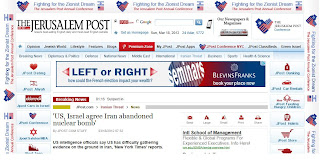 Posted by Terry MAGUIRE at 3:15 AM No comments:

Posted by Terry MAGUIRE at 3:39 AM No comments:

Posted by Terry MAGUIRE at 4:55 AM No comments:

Why I Am Leaving Goldman Sachs - NYTimes.com

Posted by Terry MAGUIRE at 4:48 AM No comments:

The Power to Kill - NYTimes.com

I agree.
Posted by Terry MAGUIRE at 12:32 PM No comments:

I am going to try to post some notes about various flights I have taken, asking quesitons, making observations, etc.
For this flight on 9 March, I was confused once again about a critical safety quesiton. The pictograms in the seat pockets are confusing about life rafts. Do most passengers understand that there is a difference between landing on land and on water? Was it clear when that plane went down in the Hudson River in New York? It seems each plane has the potential to be different and I do not think this is communicated well enough by airlines in general and certainly was not by BA for this flight. Were we to use the exits over the wings or not in the event of "water landing" as they say?
Note sameness of shops at LHR and answer to question about changing to earlier Nice flight. Shops all owned by chains - WHSmith, Dixon's - why not more competition from smaller?
Boardinfg pass from AA at RDU gives no infomration about terminal at LHR.
(Offered second cup of coffee on preceding AA flight to LHR. Warm croissant. Top Chef on the screen.)
Posted by Terry MAGUIRE at 10:19 AM No comments:

Many Consumers Find It Hard to Step Away From Daily Deal Sites - NYTimes.com

Posted by Terry MAGUIRE at 3:48 AM No comments:

With all of the criticism of Iran, does non-signatory status for Israel mean that there are no IAEA inspections? Why is Israel better than Iran? I certainly don't see any reason to treat one country differently than the other. What's the rationale for doing so?
Posted by Terry MAGUIRE at 4:47 PM No comments:

How many newspapers approach their local coverage in the same way?
Posted by Terry MAGUIRE at 1:28 PM No comments:

My views on the part of North Carolina where we live....

More specifically, this is our North Carolina home...

A special interest is what we eat in North Carolina

From Nice, this is one of my favorite passions

Issues relating to both France and the US are especially interesting

If you want to know when I add something, enter your e-mail address below

Terry MAGUIRE
Media/internet lawyer and advocate. Irish and US citizen (Chapel Hill, North Carolina). Thirty-five year career working with newspapers and other media to pursue opportunities and solve problems. Working on a center for the media of all the countries around the Mediterranean basin - the Mediterranean Media Center in Nice, France - and digital services addressing food in North Carolina. Member of the Washington, DC Bar.